A Touch of Luxury with Chandon Hamper The Cheese Entertaining Hamper with Clicquot The Ultimate Foodies with Moët Hamper 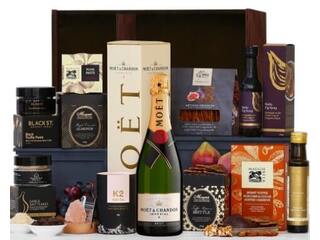 A Touch of Luxury Hamper Plan a weekend of romance - with new ideas for 2022 With winter upon us, everyone is looking for easy ... Romantic Ways To Celebrate Your Anniversary

Creative Date Ideas For Romantic Couples Despite what the romantic comedy genre will have us believe, love ...

Romantic Hampers For An Anniversary

Anniversary Gifts For Every Year

What is the best gift for an anniversary?

What do you put in an anniversary gift basket for couples?

If you’re buying an anniversary hamper for couples to share, we recommend a gift basket with champagne, chocolates, or gourmet nibbles. Choose matching his and hers anniversary gift baskets with pampering products, snuggly robes, candles, and more goodies to create a romantic atmosphere on their anniversary. For anniversary hampers for parents or friends celebrating a milestone wedding anniversary, they will love our wine and gourmet food gift baskets.